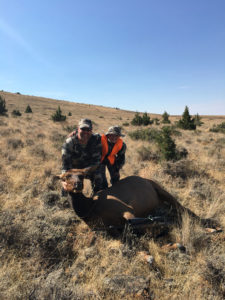 Owen was not able to draw the tag he wanted in this year drawing so This tag was one of Oregon guaranteed first time youth tags. The season started today and With some help from a friend we were given a starting point for a unit we had never hunted. Last night we tried to scout the unit but many of the roads that should have been open were closed by land owners so we ended up not getting any scouting in. This morning we decided to try a spot farther down the road. On the way in we saw a big herd of elk but they were on private property. We continued on down the road and stopped at a piece of BLM land that touched the road. We hiked in a ways and I told Cody to glass one direction while I glassed the other. Cody hadn’t been glassing for even a minute when he spotted a herd feeding and getting ready to bed. I ranged the biggest tree I could find to see how far they were 1654 yards away. This country was pretty much wide open sage brush other than the juniper tree’s the herd was bedding in. Because of the topography and the land owner ship around us we only had one choice and that was to walk the fence line cutting the distance but also stay away from the elk and trying to look like we were going to walk past them and not at them. Once we got to about 700 yards we finally had a small dip we could work our way towards them more. As we got close to cresting the hill I had the boys hold back and I crawled to the top. Once I spotted the elk again I ranged them at 518 yard to the closest one. I had the boys come up to me and we proceeded to crawl another 30 or 40 yards so Owen would have a shot. I dialed the turrets on the gun to the right elevation and range and the wait began. By this time it was 10 am and the sun was beating on us pretty good in the wide open with only 12″ tall grass, a random sage bushes, lots of rocks and some kind of little shrub that was very annoying and would poke you through your clothes. Now came the hard part. Keeping the kids still and somewhat comfortable while we waited for the right elk to stand up. Several elk would stand turn and lay down or feed but not give us the perfect broadside shot I wanted owen the wait for. Finally right about 11 a nice older cow stood up and feed to our left. She finally stopped in the right spot long enough and Owen took the shot. I watched as the bullet hit her and then her fall over. Owen made an absolutely awesome shot and we got to watch as 60 or so elk ran over the hill. 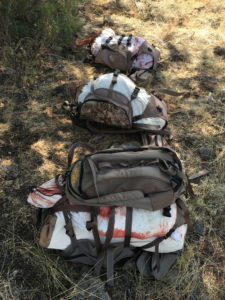 Once we got to her the work began and by 12 I had all the meat off and in game bags. We decided to try and pack her out all in one trip so we loaded Cody as heavy as he thought he could handle and I took the rest. Owen took and the gear and away we went. That worked for a little while but Cody had overestimated. In his defense he was carrying 3/4 of his body weight on his back. So we dropped off some weight and finished the hike. Turned around and went back. By about 3:20 we had everything to the truck and headed to town to the meat cooled. This cow was an old cow and here ivories were worn down to almost nothing. It was a great cow to take out of the herd as I do not believe she had a calf either. I don’t think it could have worked out any better. 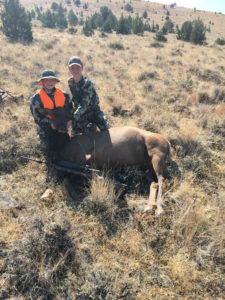